We could all use a glass of wine, or three, waiting for this year’s election, but have you ever considered what White House residents uncork once they’ve settled in? Turns out most Presidents have a penchant for fine wine.

Frederick J. Ryan Jr.’s Wine and the White House – A History is a lively, historical romp through the Presidential cellars and the traditions that have evolved to make wine an influential part of White House culture. Thomas Jefferson’s well-documented passion for French vintages may have set the stage—and the table—for a legacy of White House entertaining and multiple-course dinners, yet each President since Washington has recognized wine’s intrinsic value when it comes to diplomacy and creating an atmosphere that puts guests at ease. Presidents from Adams to FDR, Kennedy to Clinton, and even those who have abstained, have raised a glass (or in the case of Benjamin Harrison’s inauguration dinner, thirteen) to dignitaries, royals, and celebrity guests filled with wines to suit their tastes as well as the political needs of the occasion. 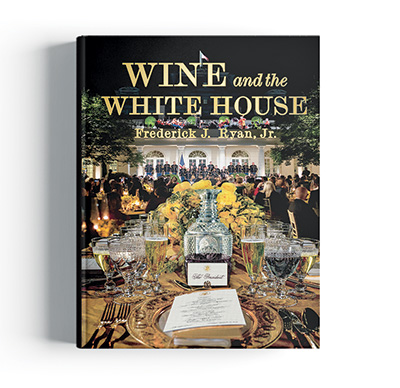 Ryan, an aficionado of both wine and White House history, gives readers insight into the personal relationship each President has had with wine through letters and notes punctuated with historic images and rare ephemera. Rich with photographs of State Dinners, receptions, holiday celebrations, and intimate gatherings, the book provides an unprecedented look at historic hospitality and the accompanying pomp and circumstance. Ryan shares candid moments in a section of the book devoted to Presidential toasts honoring distinguished guests, including President Nixon’s toast to Chinese Prime Minister Zhou Enlai in 1972, and President Clinton’s toast on the eve of the Millennium (which included three toasts, including one to Hillary).

Selecting wines for White House functions was never an easy task. In Wine and the White House Ryan provides an insider’s perspective on the complicated process of selecting, acquiring, storing, and serving wine in the White House. A first-hand account of the intricacies comes in the form of an essay by Daniel Shanks, who served as the first White House Food and Beverage Usher since 1995, as well as musings and reflections by First Ladies, service staff, and social secretaries who were often tasked with aspects of the decision making.

Wines from Europe’s top regions—French Burgundy and Bordeaux, German Riesling, Italian Soave, Spanish Madeira, and fine Portos—were favored during early administrations, as were wines from Virginia, selected to showcase American viniculture and regional dishes. Many Presidents have included wines from their home state (or that of their guests) in the rotation, hence the Virginian wines and bottles from Michigan, Texas, and even Arizona (a tribute to retiring Justice Sandra Day O’Connor). California wines, mainly Cabernet, Chardonnay, and Blanc de Blancs, and those from New York’s Gold Seal, Taylor, and Great Western wineries were popular choices during Lyndon B. Johnson’s presidency and remained on White House menus for decades.

When the 1976 “Judgment of Paris” blind tasting catapulted the reputation of California wines around the globe, the White House took note, and California wines soon topped the list—as they still do. Noted oenophile and California native Ronald Reagan chose the finest Napa Valley vintages during his presidency, never serving wines from the same vineyard more than three times. His favorite bottles were flown in for Embassy events he hosted abroad.

In 1992, President George H. W. Bush, Sr. initiated “American Wine Week” at the White House which eventually led to the “America only” wine policy in place today. But, as Ryan points out, the policy has proven to be challenging, especially when the White House is entertaining leaders from other major wine-producing countries. The Reagan administration came up with a diplomatic solution to address this dilemma when hosting the French Prime Minister by selecting a wine that represented the best of both countries. For this occasion, a bottle of Opus One, a partnership of France’s renowned Baron de Rothschild and Napa visionary Robert Mondavi, was uncorked, and a potential faux pas was averted. The seemingly simple solution of selecting a wine that connects the U.S. with the visitor’s country is still put into practice today, most recently by Melania Trump when hosting the current French President and his wife.

Over the decades, vintages from most all wine-producing states in the U.S. have made their way to the table, including those from Oregon, Washington, and New York’s Finger Lakes and Long Island regions. Notably, Long Island’s Wolffer 2012 Estate Noblesse Oblige Sparkling Rosé was served by President Obama at a dinner honoring the Prime Minister of Singapore.

In Wine and the White House history buffs will feast their eyes on the rare historic ephemera and vintage photographs. Menu cards, bills of sale, vintage bottles, labels, and handwritten notes from White House wine specialists (and even some Presidents) are woven throughout the pages. Lush new photography chronicles the White House collection of glassware, decanters, and service pieces, among them, the massive 700-piece set ordered by President Pierce after a visit to New York’s Crystal Palace Exhibition; and special stems designed to reflect the architecture of the Federal Building produced for the 1939 New York World’s Fair.

Wine enthusiasts will appreciate reviews of grape varietals and reflections from renowned winemakers around the world whose iconic wines have long graced White House tables. For those looking for an at-a-glance list of wines served during each Administration, there is a complete chronology of every bottle poured at a White House event since World War II.

Wine and the White House – A History provides a staffer’s view inside the walls of the White House. Not just about wine, history, or White House residents, Wine and the White House serves up a lesson in good taste and delicate diplomacy. While no President can put a value on hospitality, when it comes to defining good statesmanship and breaking down social barriers, Ryan skillfully demonstrates that a glass of fine wine is worth every sip.

About the author: Frederick J. Ryan, Jr., is publisher and CEO of the Washington Post. He served in a senior staff position in the Ronald Reagan White House and as Reagan’s post presidential chief of staff. Ryan currently serves as chair of the Board of Directors of the White House Historical Association, of the Board of Trustees of the Ronald Reagan Presidential Foundation, and of the Wine Committee of the Metropolitan Club of Washington, D.C.