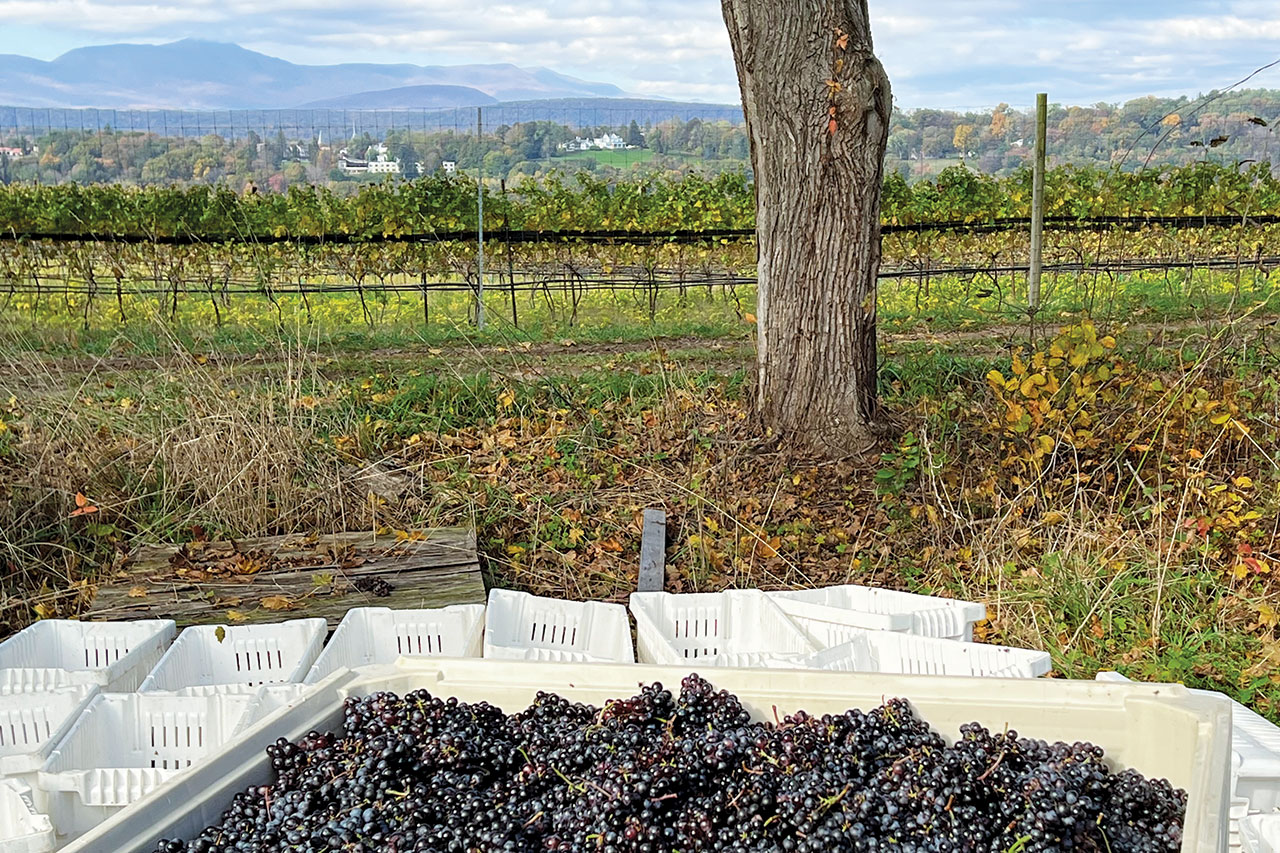 “The 2020 is the best vintage of Cabernet Franc ever.”

It was a bold statement that may have caught event-goers by surprise, but winemaker Kristop Brown explained—it was not an exaggeration. The proof was in what Brown was about to pour the tasters gathered around Robibero Winery’s table at the Hudson Valley Cabernet Franc Coalition’s tasting event last May. Brown brought a sample of the still-in-process 2020 Cab Franc he had taken right out of the barrel that morning. Curious tasters, anxious to be the first to try new and upcoming releases of the region’s signature grape, wanted to learn more.

When it comes to vintages, Brown should know. He’s been a hands-on figure in the Hudson Valley’s viticultural scene for decades, and has managed Robibero Winery’s Cabernet Franc production through vintages, optimal or not, from grape to bottle since 2011.

A few months earlier, at a blind tasting of Hudson Valley-grown Cabernet Francs produced by the Coalition’s members, growers, winemakers and winery owners from across the region had come to the same conclusion—the 2020 vintage was one for the record books.

Even samples of unfinished wines thieved from their barrels so members could judge them “blind” showed early signs of the defining characteristics that have come to typify the Hudson Valley’s signature wine—aromatic fruit, balanced acids, smooth tannins, and gem-like hues.

At the late-May event, consumers and members of the trade in attendance sampled about a dozen of those banner Cabernet Franc wines from the 2020 vintage, and lapped them up.

The Year in Review

Against the odds, what started out as a potentially damaging growing season led to an extraordinary vintage for many of the region’s growers. Compared to previous years, when adverse weather conditions caused moderate, even severe, losses of tender vines at many vineyards around the Valley, heavy frost damage in late May didn’t pose much of a setback for growers in 2020. Despite Cabernet Franc’s vinifera heritage (it is the parent of Cabernet Sauvignon and Merlot), in the Hudson Valley the grapes generally muster enough backbone to withstand the region’s challenging microclimates and varied terroir. But coupled with a short growing season that inconsistently ripens the fruit and the unpredictable effects of climate events, it’s clear that Mother Nature plays an outsize role in each vintage’s haul.

Typically, the region’s cool, natural terroir can produce the high acid needed to make a wine that can withstand aging, but often there aren’t enough degree days to allow fussier grapes like Cabernet Franc to concentrate the sugars needed to balance out the acidity. In 2020, the late summer and fall conditions brought warm days and average moisture, which allowed the grapes to ripen at an even pace. Growers could let the grapes hang on the vines until early or mid October to soak in as much sun as possible. The wines made from those grapes are proving to be some of the finest the region has ever produced.

Eking out a decent harvest in any year doesn’t happen without some cajoling and kid-gloved treatment in the vineyard, though. “We employ ‘high-touch’ farming practices,” says Bruce Tripp, winemaker at Milea Estate Vineyards in Staatsburg. “We also get superior drainage from coarse glacial soils that helps keep the vigor in check, so we end up with fruit that has small berries and thick skins.” In 2020, this high skin-to-juice ratio created a super-concentrated wine packed with powerful aromatics and intense flavor. The wine was awarded a double-gold medal at the 2022 Hudson Valley Wine Competition and named Best Cabernet Franc in New York State by the Great American International Wine Competition.

Seems even wildlife can sense a good vintage. At Benmarl Winery in Marlboro, less than a ton of grapes made it to harvest in 2020, according to general manager Angelo Curci. Intense critter pressure (deer and insect damage) dramatically reduced the yield, leading winemaker Matthew Spaccarelli to employ creative – and necessary – methods to craft a solid wine.

“Over a 15-day fermentation, we punched the juice down twice a day to add air and help extract tannins from the skins,” says Spaccarelli. The wine was sturdy enough to handle softening in an oak puncheon for an extended period of time. Seventeen months later, those efforts yielded just 55 cases of Cabernet Franc wine—and a 90-point rating by Wine Enthusiast.

Nearby, at Quartz Rock Vineyard, co-owner and winemaker Dan Heavens was left with grapes from just one of the clonal varieties of Cabernet Franc they grow on their Nightingale Farm, after heavy critter pressure ravaged the rest. Despite the low yield of surviving grapes (clone 01), Heavens coaxed out the best of the clone’s characteristics, and fashioned a vibrant Cabernet Franc wine with a youthful expression of earth, pepper, and spice.

At Whitecliff’s Olana Vineyard in Hudson, the moderating currents of the Hudson River generally offers their Cabernet Franc vines some protection from dramatic temperature swings and helps thwart off frost. To maximize the intensity of the fruit that thrived on relatively young, well-tended vines until harvest time, winemakers Michael Migliore and Brad Martz treated the grapes to 24 hours of cold-soaking and left the whole berries to ferment rather than crushing them. Aging the wine for 14 months in gently used American and Hungarian oak barrels rounded out the flavors and softened the edges to produce a balanced lush wine. The final product captured a double-gold medal and was named Best in Show at the 2022 Hudson Valley Wine Competition.

With the uncertainty of climate change and its effects on heat, drought, and other factors in the vineyard, it will be hard to predict when there will be another vintage like 2020 for Cabernet Franc. The awards and accolades that these wines have racked up speak for themselves, but try them for yourself and let your palate be the judge.